Posted by Howe Q. Wallace on Thursday, May 5th, 2016 in Communication, Teamwork, Training
no Comment.

When it comes to doing what we do, what’s the difference between us and the next guy?

When I listened to Warren Buffett last week, he referred to that difference as the “moat”. If you aren’t familiar with the term, the “moat” was a ditch built around a castle which caused the castle to be more difficult to attack and penetrate.

A “moat” can be deep and wide. The deeper and wider it is, the more secure it is.

When it comes to competing in your market, what is your moat like? Buffett says the businesses which he invests in continually work to widen their moats.

It’s a great discussion to have. Taking time to talk about our moats and what we can do to widen them is also a key to our progress.

Widening our moats takes some digging. It takes some analysis of what enemy is out there trying to attack us.

Widening our moats keeps us a step ahead. When the enemy considers how to cross our moats, they design tools to cross certain barriers. Imagine the frustration of an enemy whose constructed a device to crossover who arrives to find the moat has grown and their method won’t work.

I found the illustration of the moat to be edifying. Maintain the moat. Make it wider. Consider our edge. Dig a little deeper. 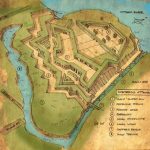